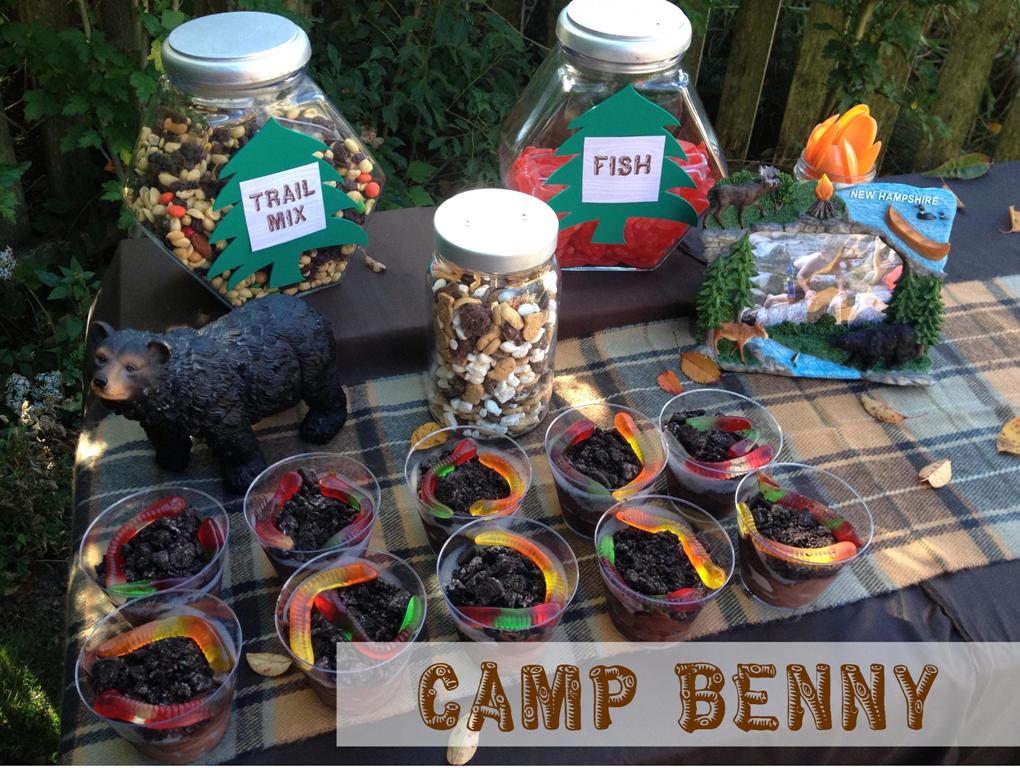 For my nephew’s 5th birthday, we wanted to do it big. It would be his first birthday inviting his friends from school and let’s face it; turning 5 is a pretty big deal.  He wanted a snake and bug theme, so I took it one step further and turned it into a camping themed party. I designed these invitations for his classmates. 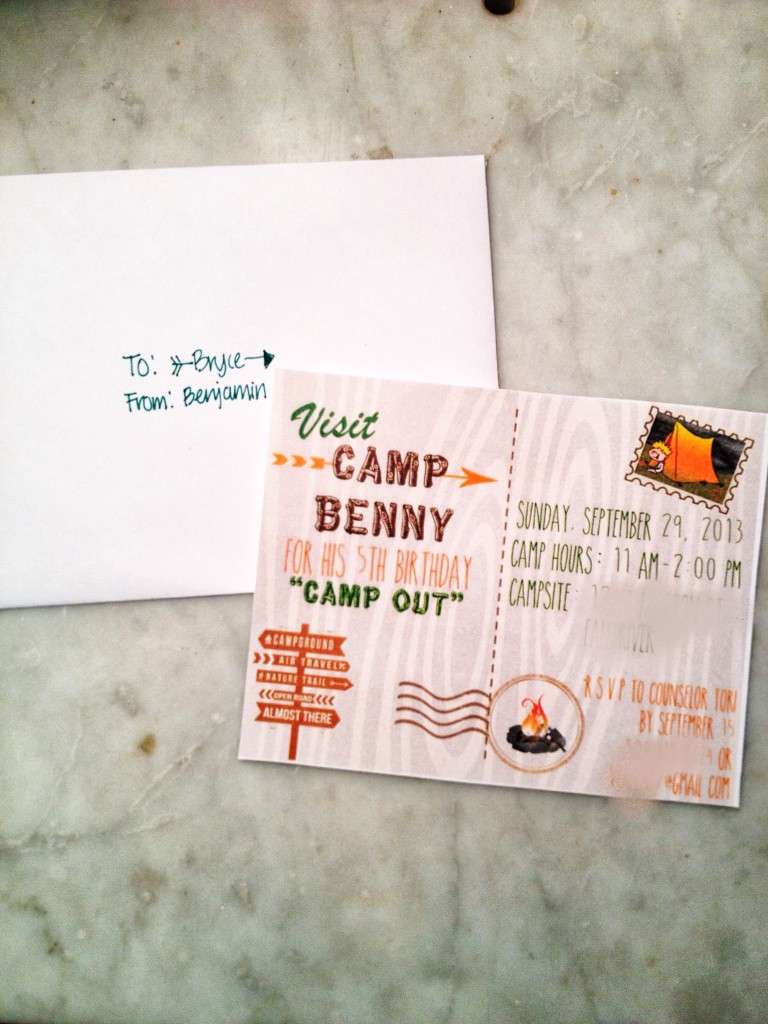 We wanted to keep most of it a surprise for him. The look on his face when he walked in was priceless. We turned the backyard into his own personal campground, complete with “Camp Benny” signs, made by Tori’s friend, who also made our camp counselor shirts. 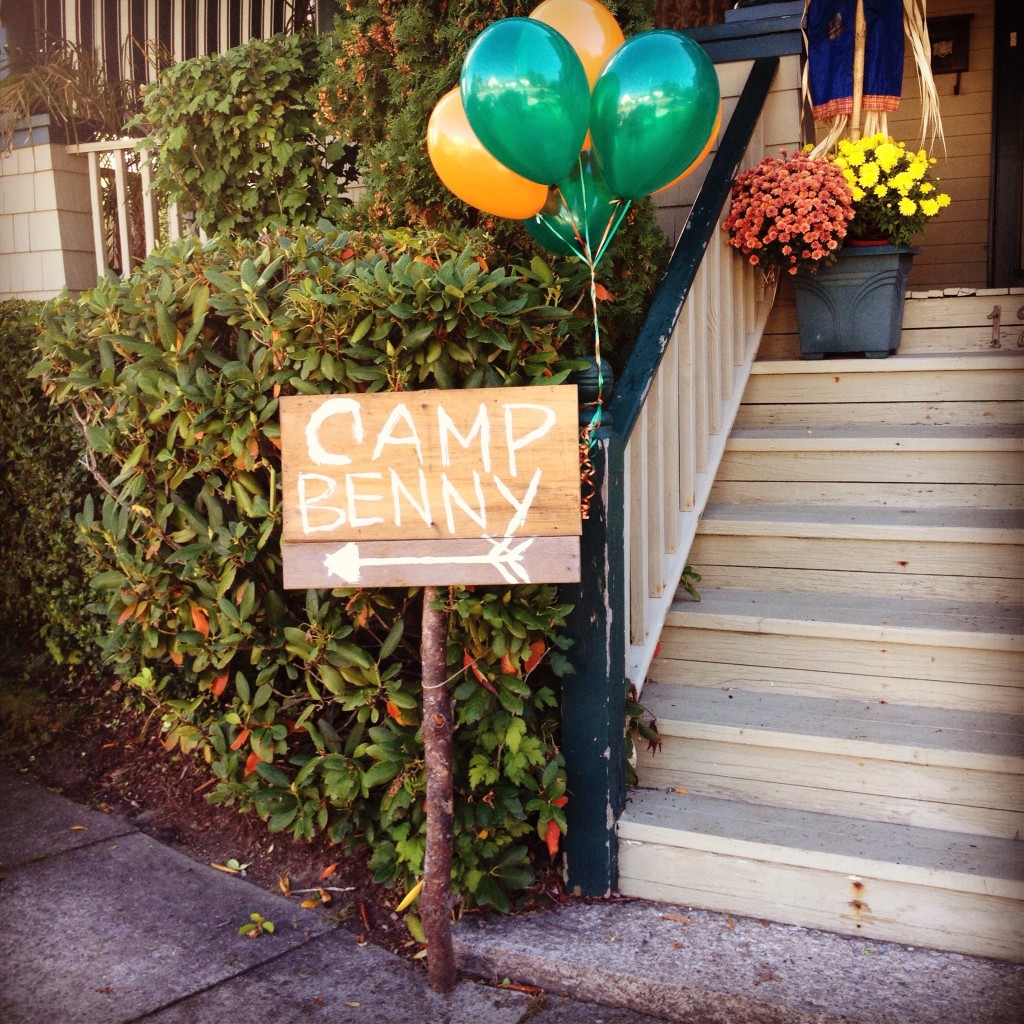 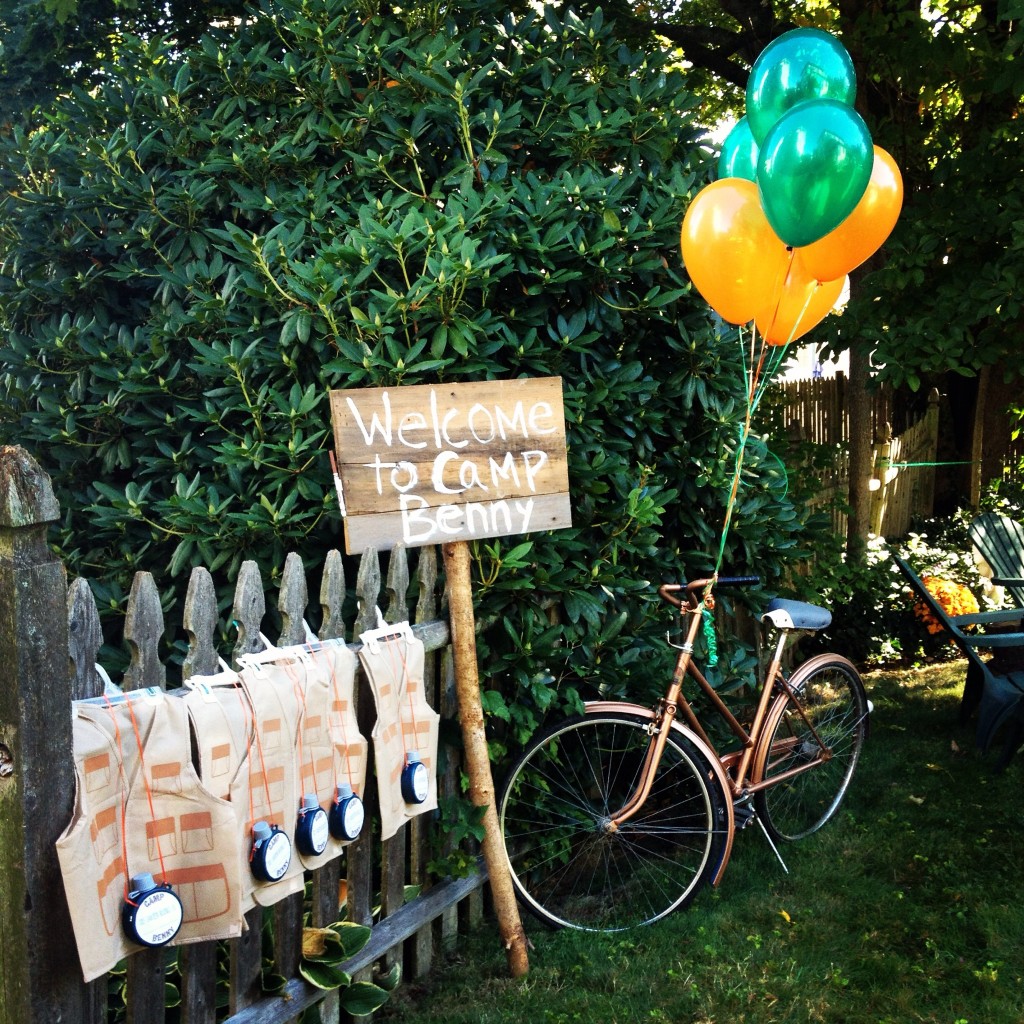 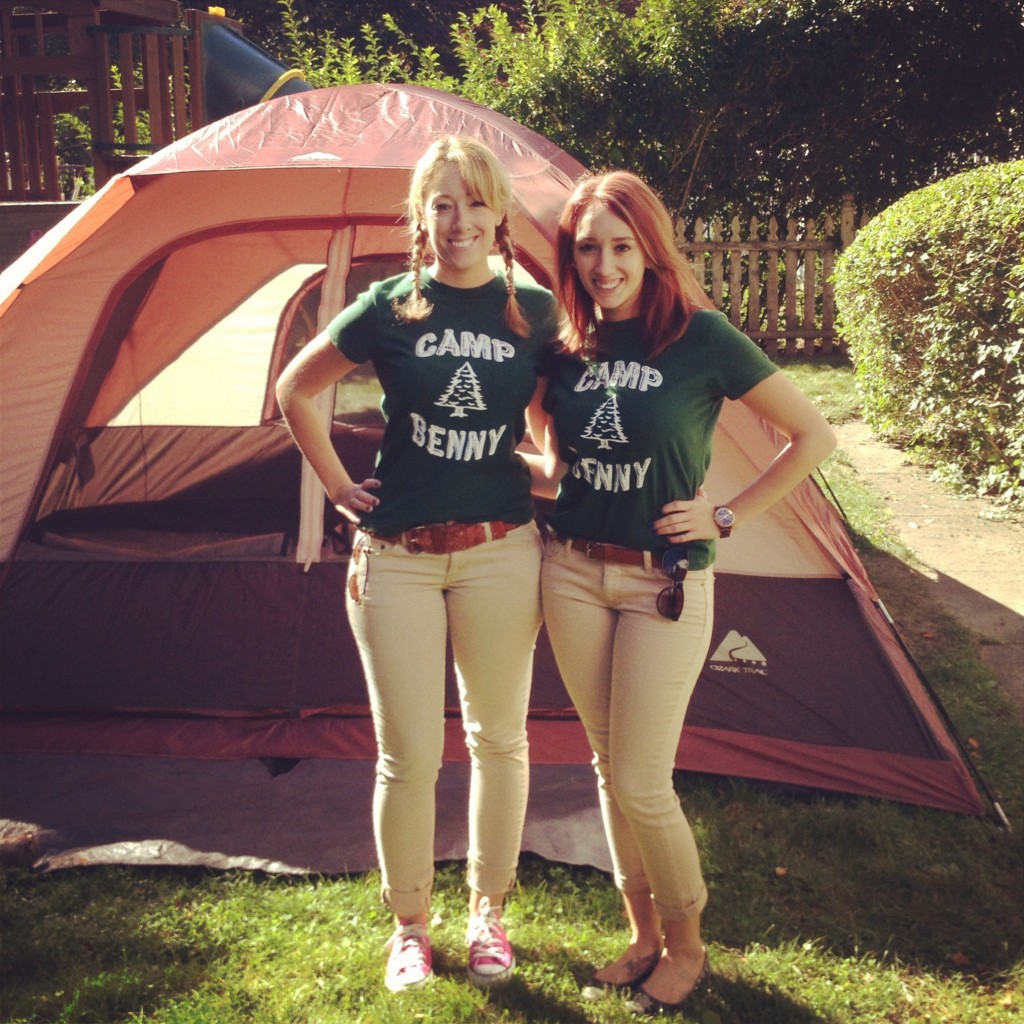 When each guest arrived, they were given a “backyard travels” vest and canteen. 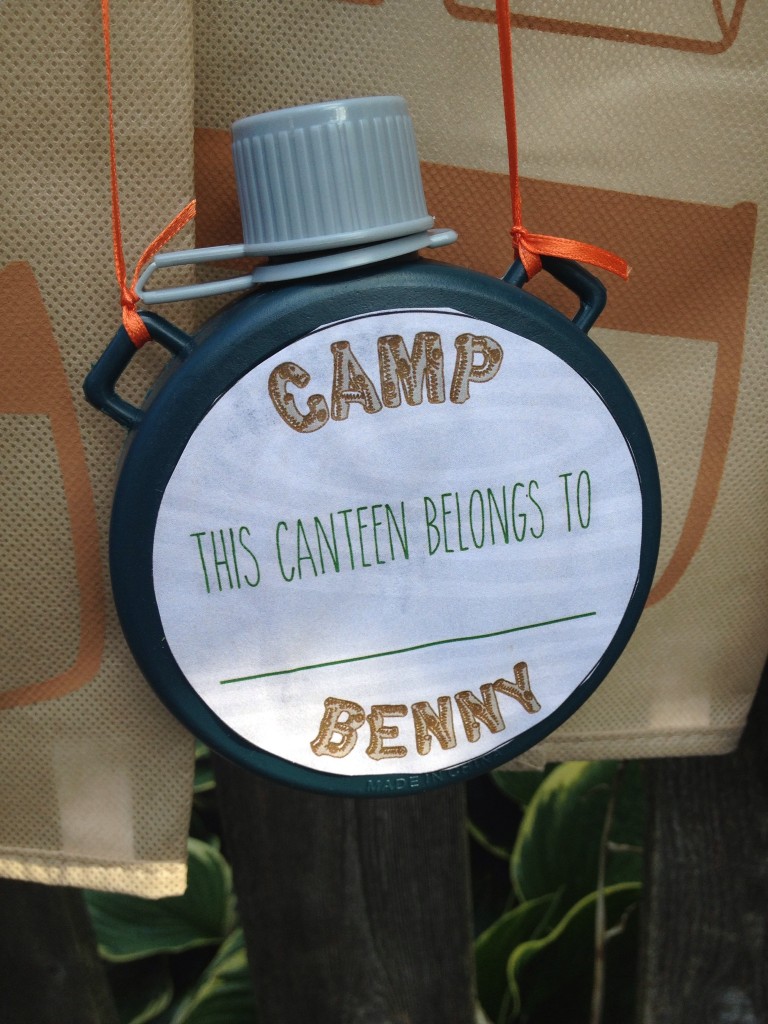 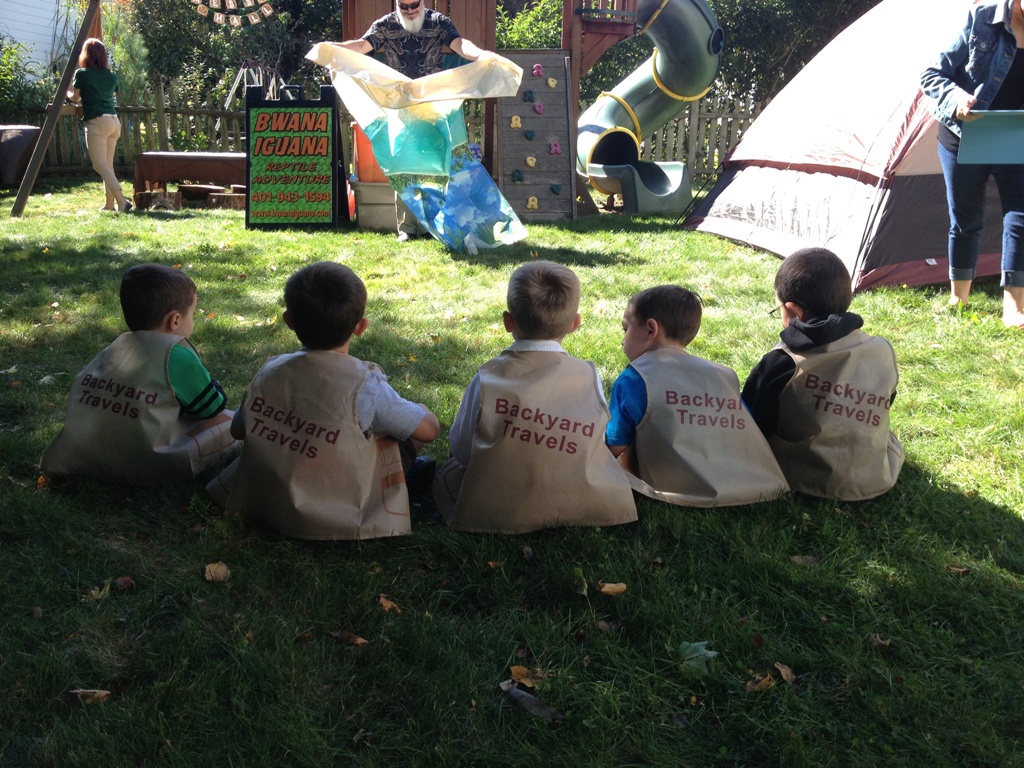 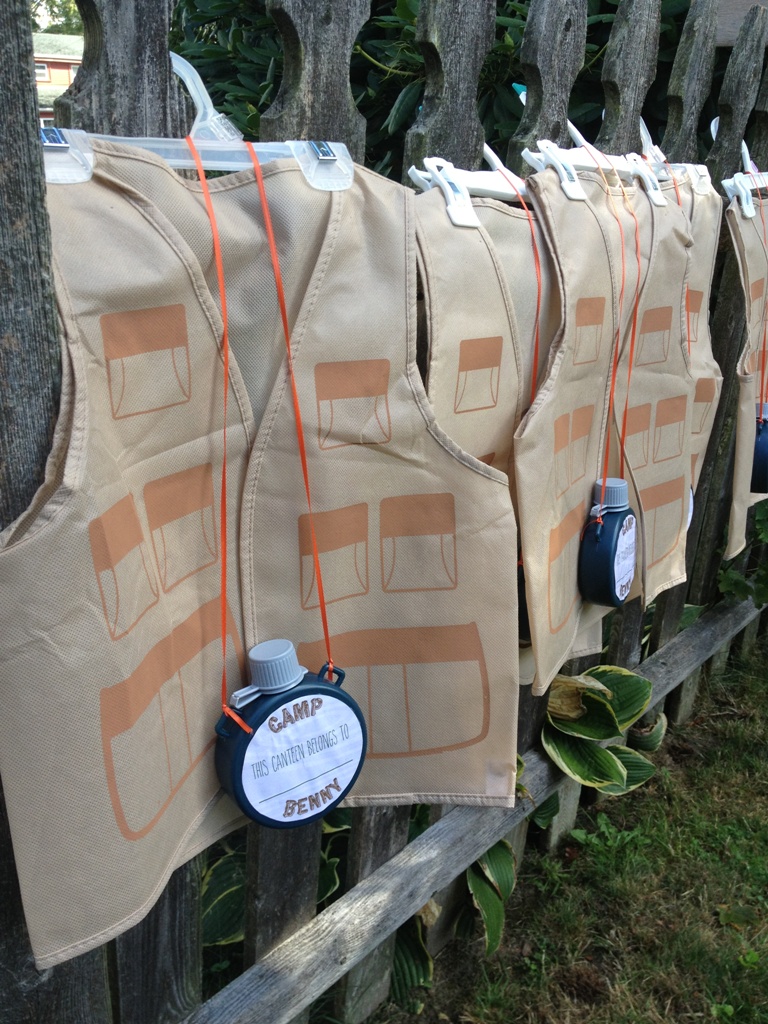 My sister scheduled a reptile show for the kids from Bwana Iguana. He was awesome! Ben got to be his special assistant and didn’t even flinch when he had to hold snakes, lizards or turtles. I even got a chance to unleash my inner Britney. What a heavy snake! 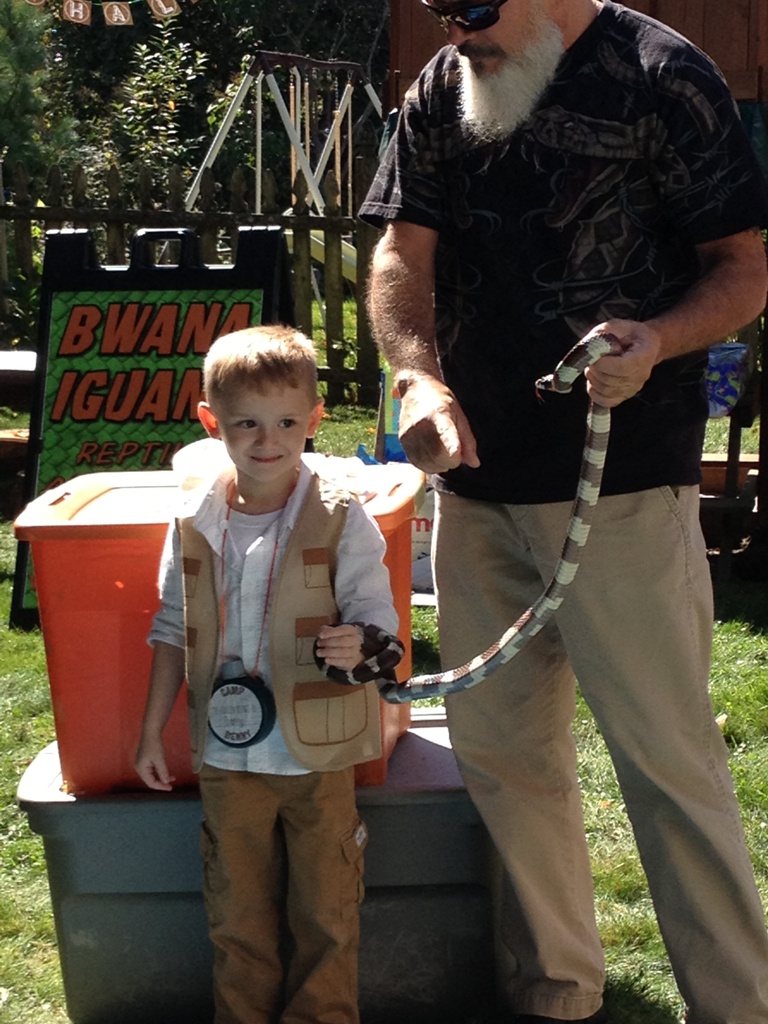 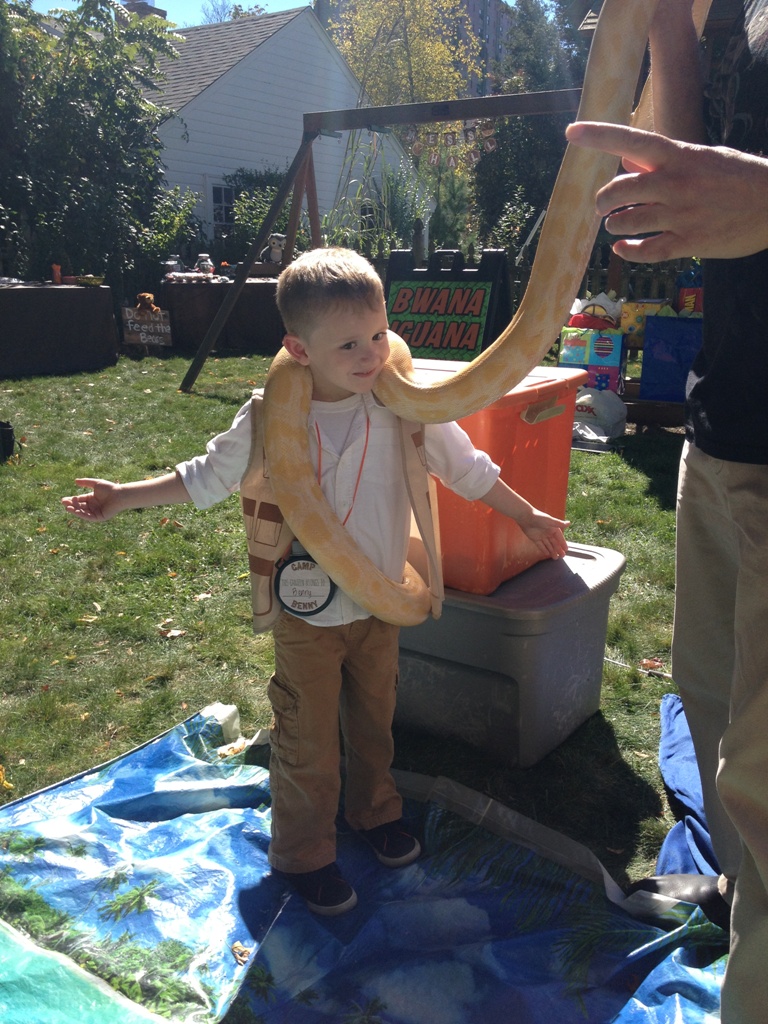 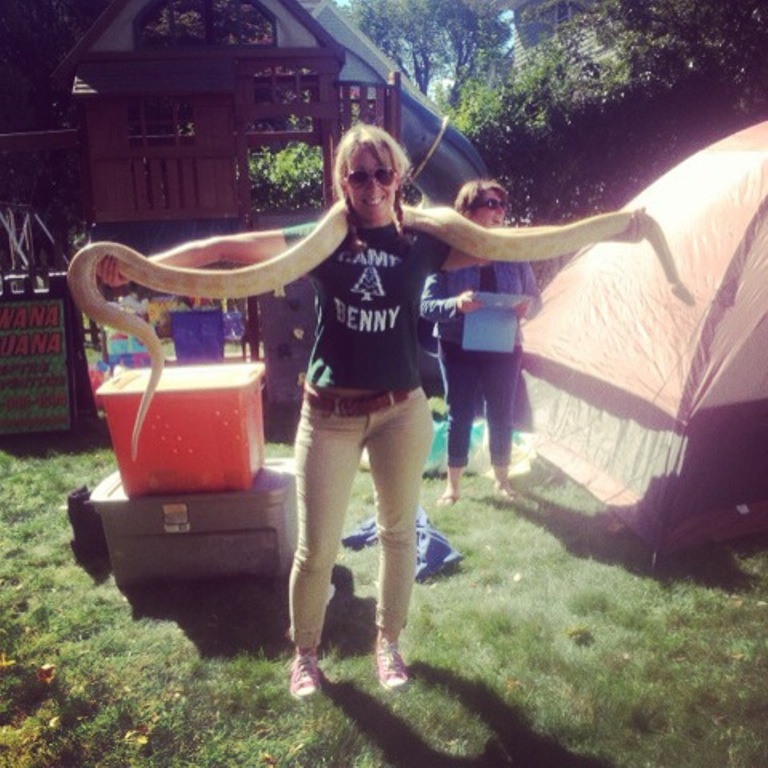 After the show (and some serious hand washing), lunch was served. My sister contacted someone on Craiglist who had cut down a pine tree and was giving away the wood. We used the shorter pieces of the trunk as seats for the kids and the taller ones as side tables for the adults.  I made custom Camp Benny placemats for the kids’ table in the “mess hall” (download banner here for free!). 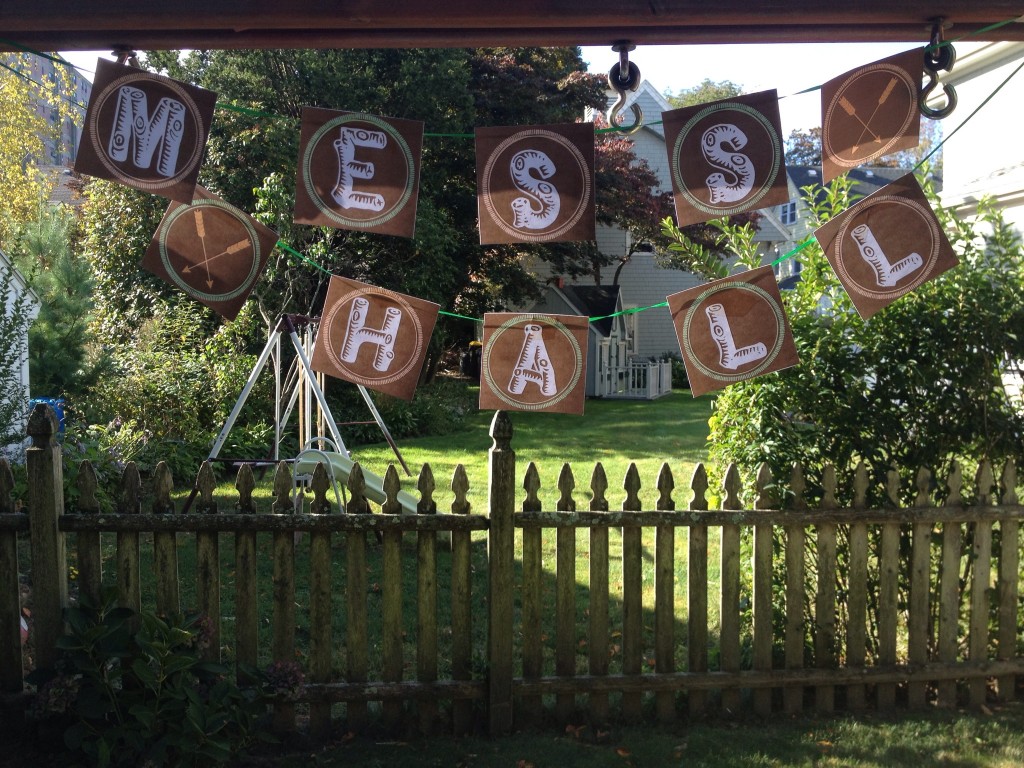 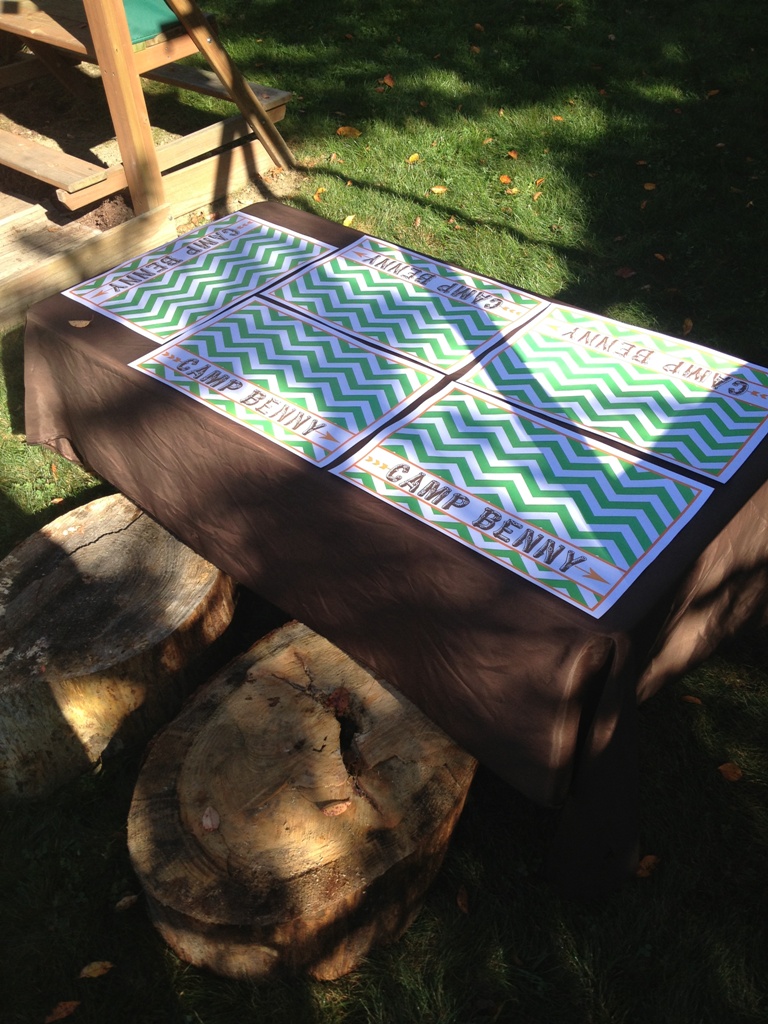 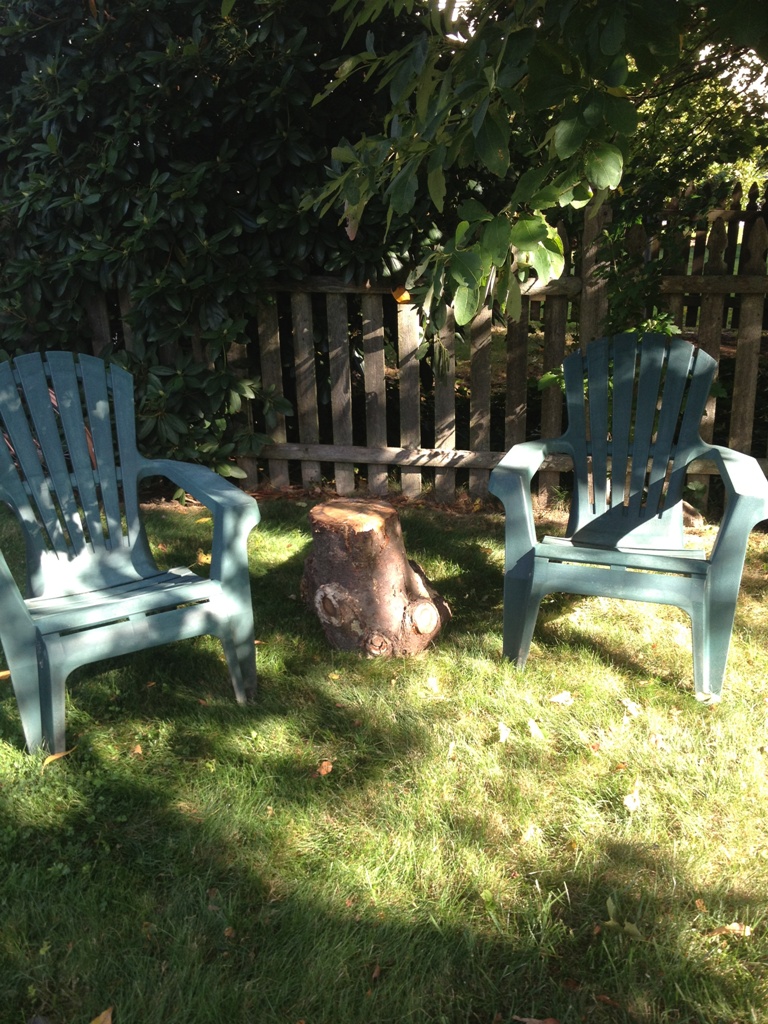 For the food and dessert tables, we decorated them with camping items from Jamie’s collection.  For the kids, we stuck to camping themed foods like hot dogs and peanut butter sandwiches made to look like a caterpillar while the adults had their choice of that or pulled pork sandwiches. We served “bug juice” in the canteens. 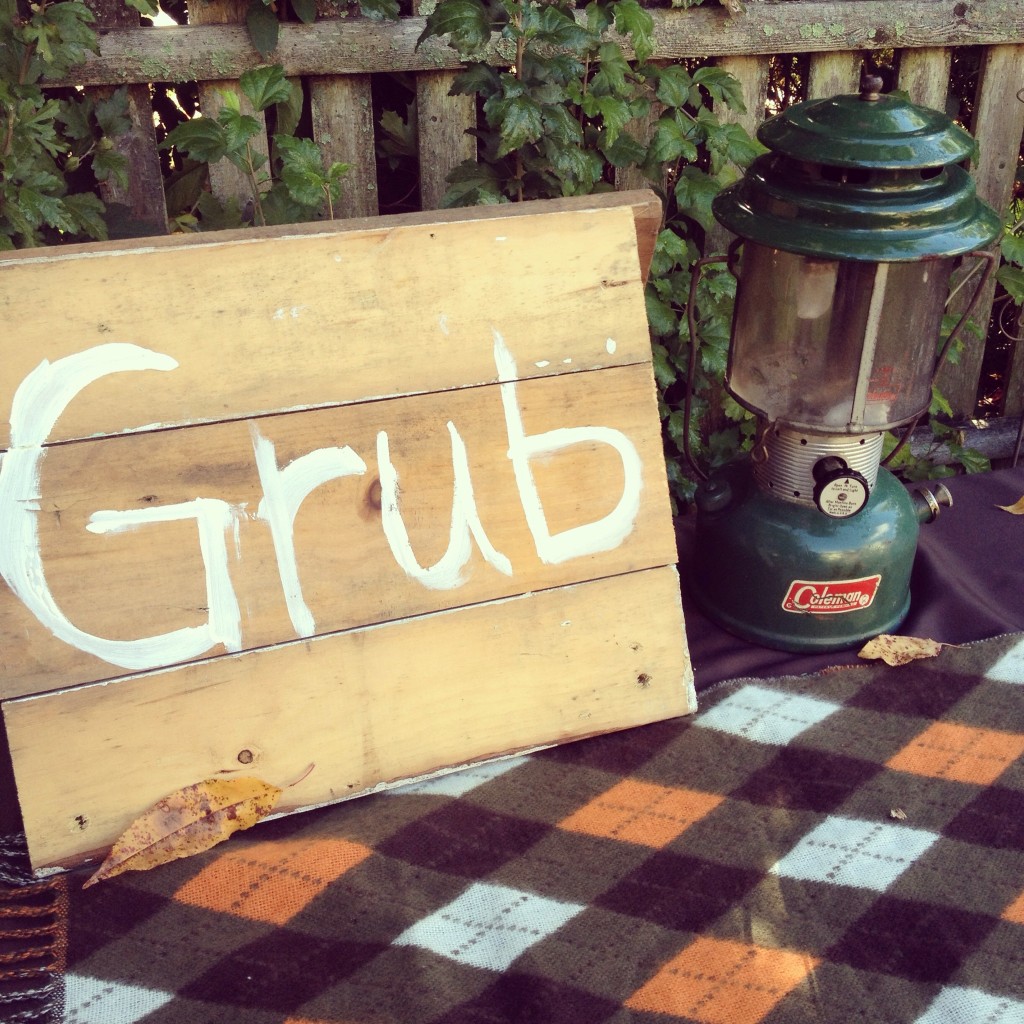 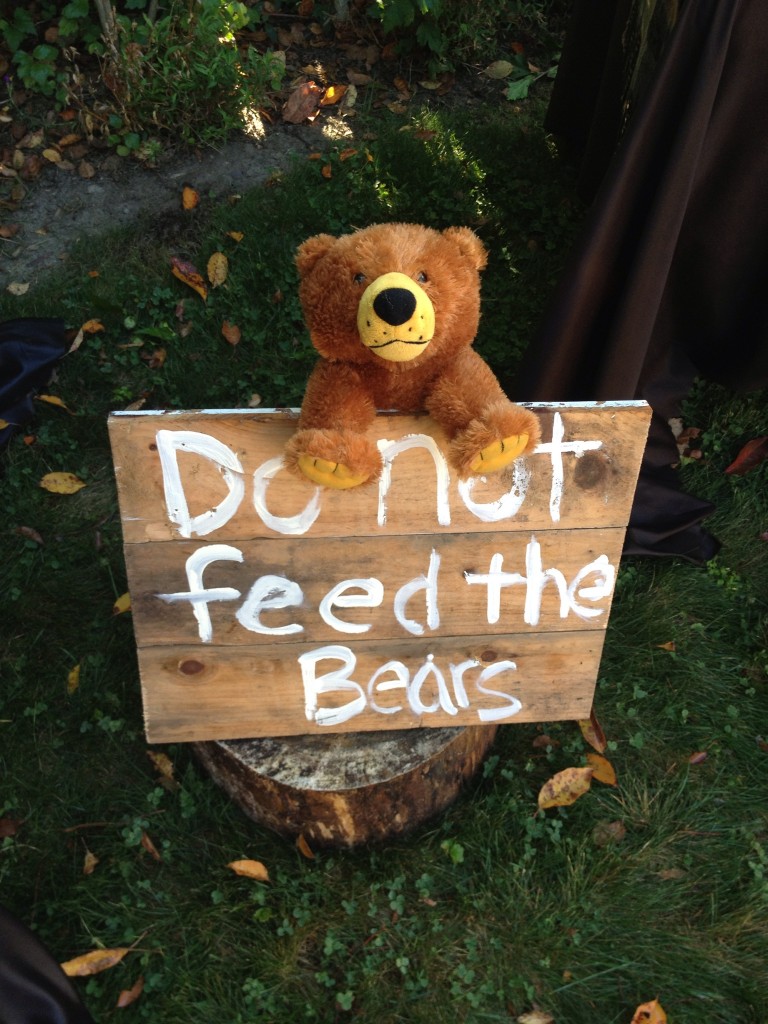 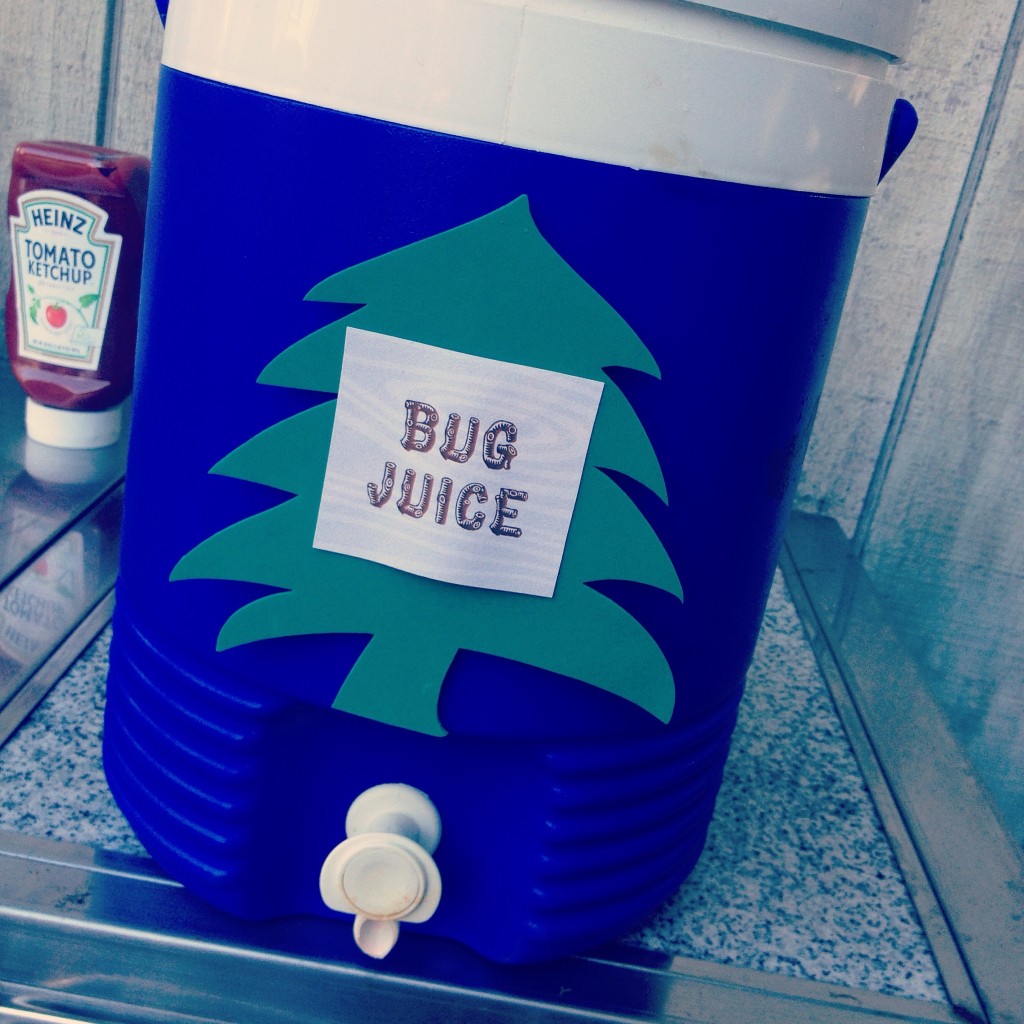 Desserts included dirt sundaes, trail mix, s’mores goldfish, Swedish Fish, s’mores balls, white chocolate turtles (which promptly melted in the sun) and of course, birthday cake. My dad and I made the cake based off of one we’d seen on Pinterest. 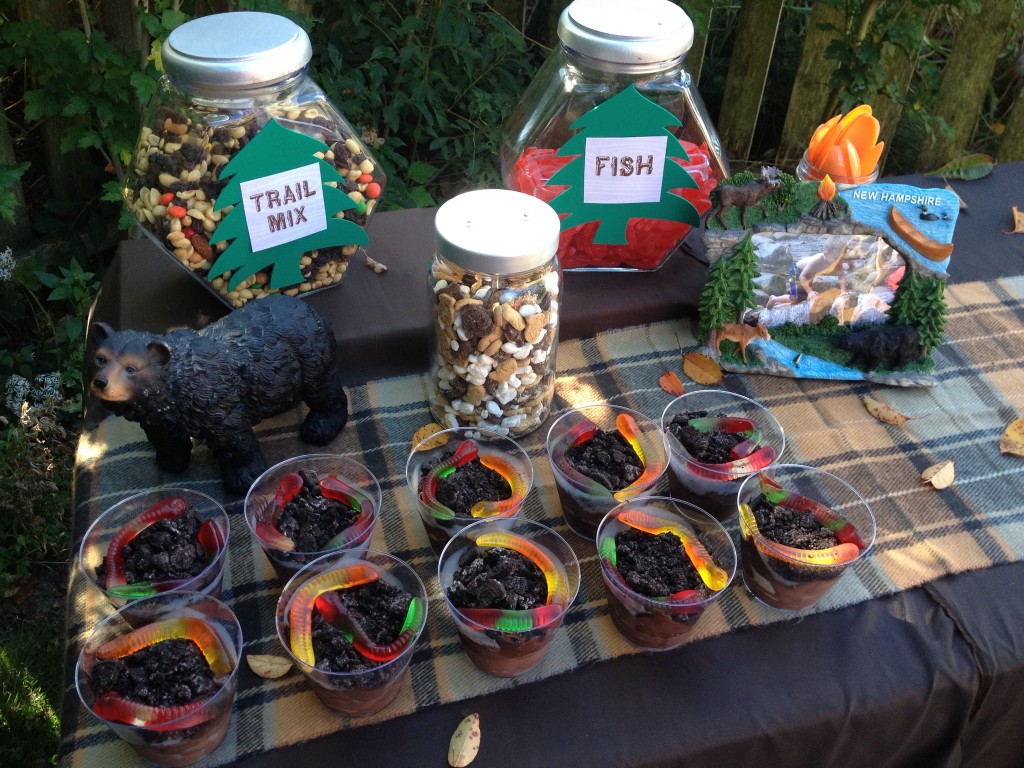 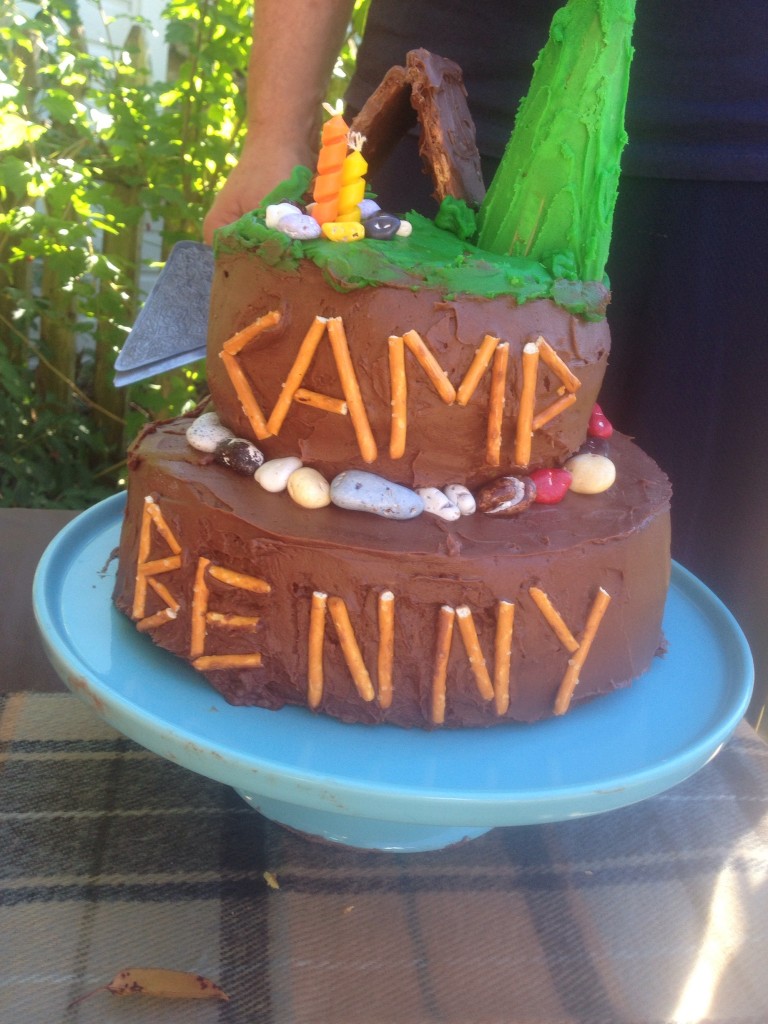 After cake and presents, the boys played with Ben’s new toys in the tent. When the party ended, the guests were given bug containers with a pair of plastic tweezers, bug net and  magnifying glass. Inside the container were fake bugs and snakes and a s’mores kit. 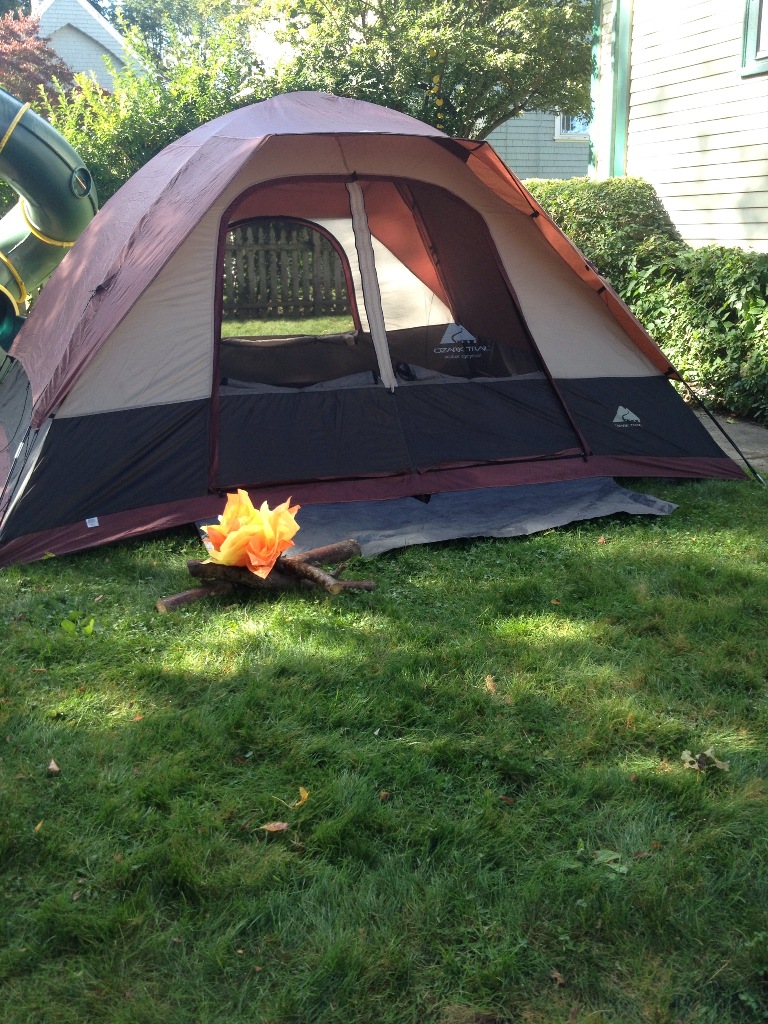 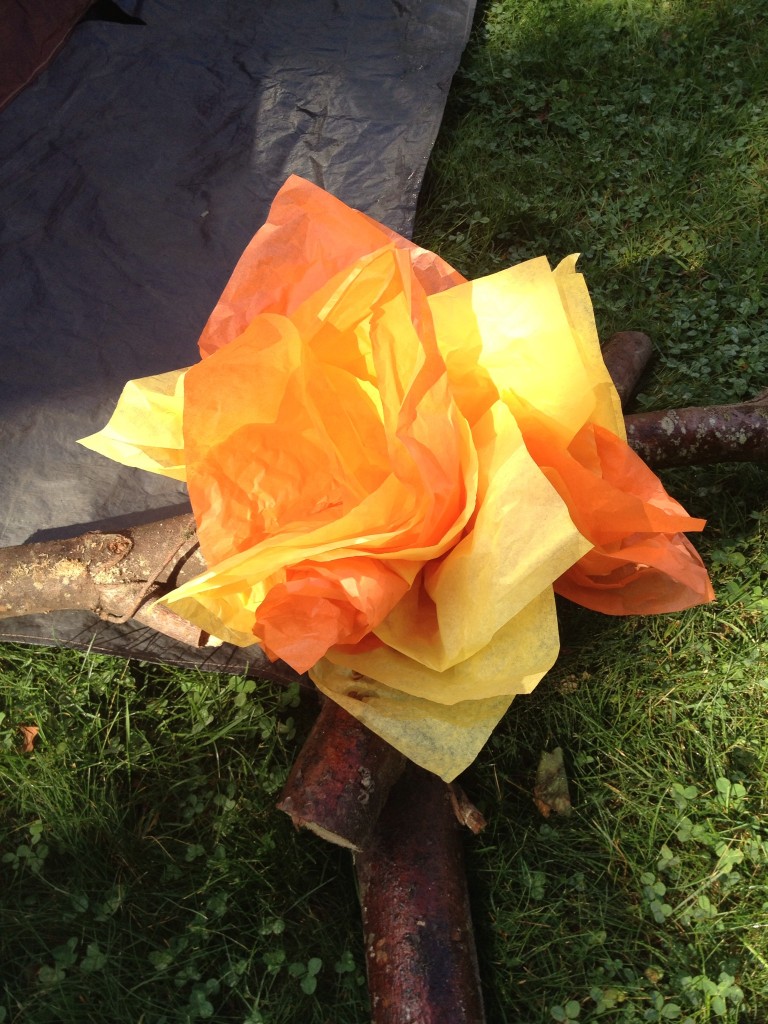 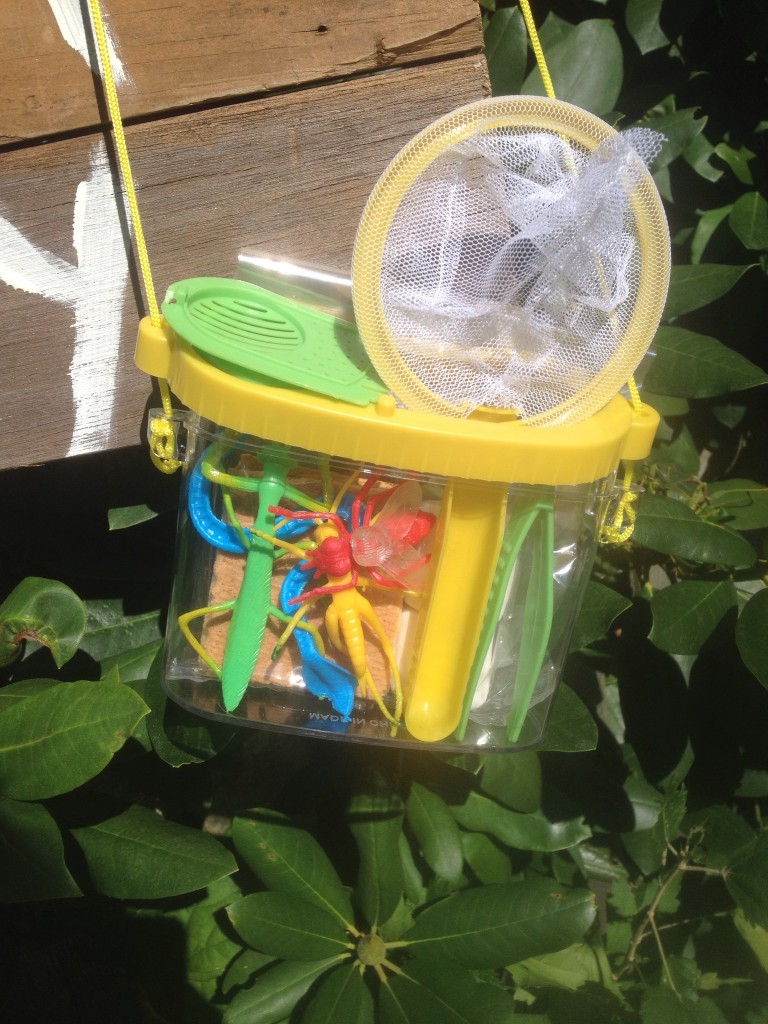 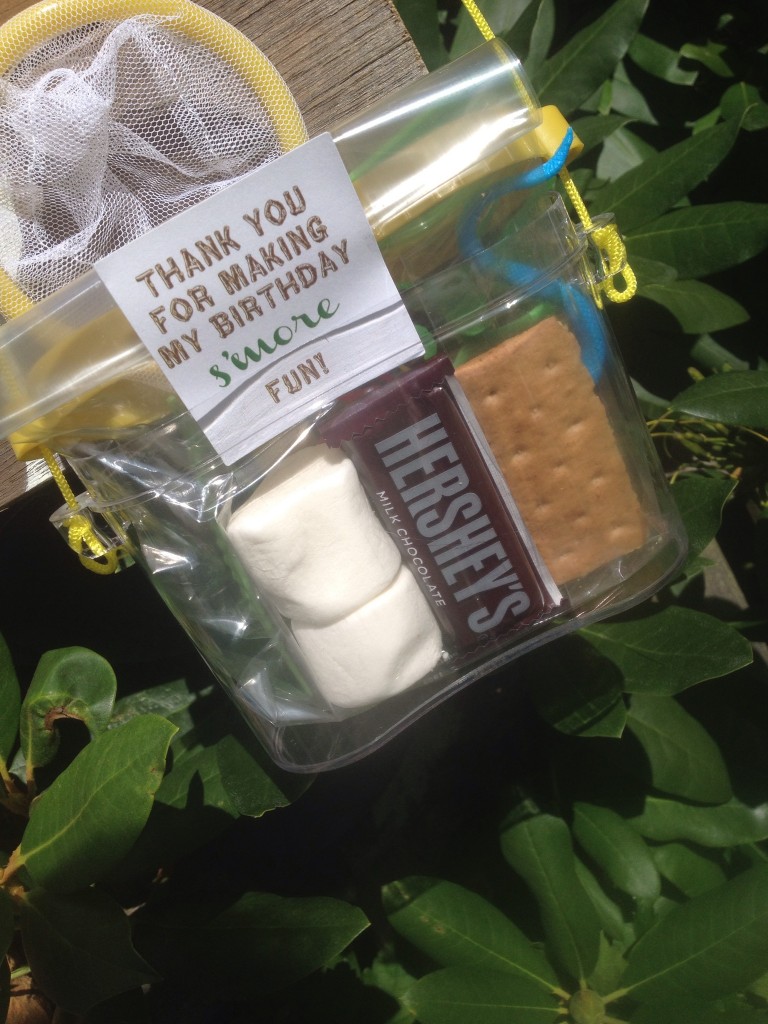 When we were taking down the tent after the party ended, we found a dead baby mole under the tent.  I FREAKED out. Like, ran away screaming unintelligible words freaking out. Hysterics to the point where Ben came out of the house and said, “Keke, what’s wrong?” When I told him what it was, he replied, “Oh, I thought you got a bad boo boo  or something because of the way you were screaming.” Nothing like having a 5 year old tell you you’re acting like a 31 year old baby.  I am terrified of rodents, dead or alive, and when I spotted it, I didn’t stick around to investigate. We had set the tent up the night before so the poor thing must have crawled under there then and got trampled by the stampede of little feet.

To view the entire Camp collection, visit my Etsy shop!