It’s no secret that Carrie Bradshaw is my spirit animal. I’ve been a lover of SATC from pretty much the get go, can recite entire episodes and for a long time, thought my life emulated Carrie’s pretty closely.

I hadn’t done a good Sex and the City binge in quite some time so on a recent Sunday, when I had way too much closet organizing to do, I put it on and fell in love all over again.

Everyone knows what a fashion icon Carrie is (and SJP too!). While I was watching, I began thinking about all the things I own that are Carrie inspired. My “Katie” necklace, gold glitter heels, a studded belt, a newspaper print shirt (like that Christian Dior dress I died over again when it made its second appearance in the first movie) and one of my favorites, the white deep V dress from the first movie. Many of these things I’ve had for years and I probably haven’t parted with them because of their Carrie connection. I was feeling inspired that Sunday night so I decided to have some fun and dress like Carrie Bradshaw for the week. Here’s what I came up with: 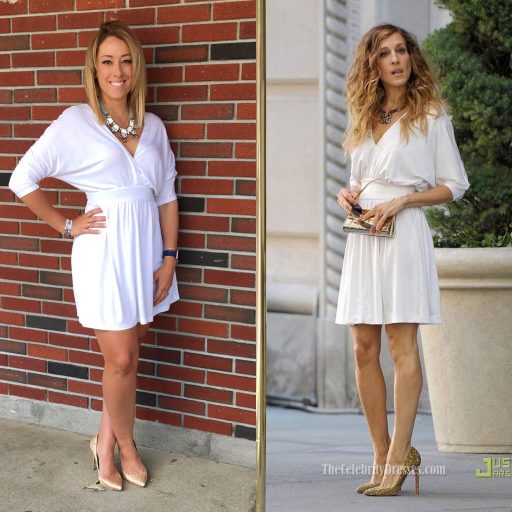 LOOK 1: The White Dress
I already mentioned how this was one of my favorite Carrie looks. When the previews for the first movie came out, I remember getting so excited with my sister for all the new fashion. We both fell in love with this white dress and searched high and low for a replica. I’ve only worn this dress a few times in those 11 years but every time I do, I get so many compliments. I paired it with similar shoes that Carrie wore it with, that I also purchased around the time of the dress. My sister and I freaked out when we saw Bakers Shoes was selling the H by Halston version. We have both worn ours countless times over the years so they were a great investment. If I’d had more time, I would have curled my hair like Carrie’s but I stayed up way too late the night before planning my outfits for the week so I overslept and was running late…in typical Carrie fashion. 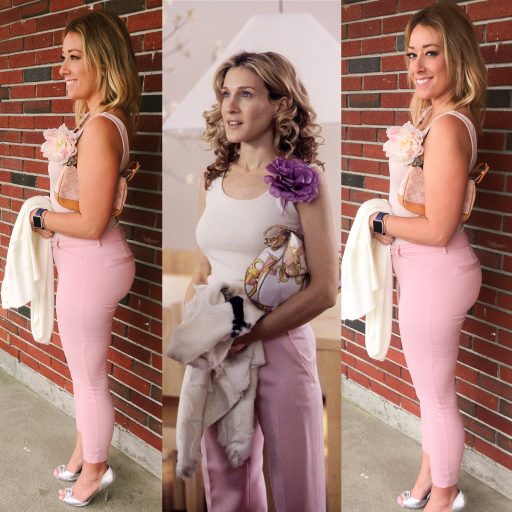 LOOK 2: The Signature Carrie Flower
Over the years, we’d see Carrie sporting oversized flowers on her shirts and dresses. I love this look from Season 3, Episode 5 where Carries begins dating Aiden. It’s classic. And really, who doesn’t love pink pants? Mine are a skinny fit as opposed to Carrie’s wider leg trouser and I opted for an oversized pink flower because that’s what I had on hand. I’m calling this the modernized version of it. Carrie wears a pointy, closed toe shoe but I opted to bring a little more edge with a silver heel, which you may recognize as a Steve Madden dupe for Carrie’s Manolos in “A Woman’s Right to Shoes”. 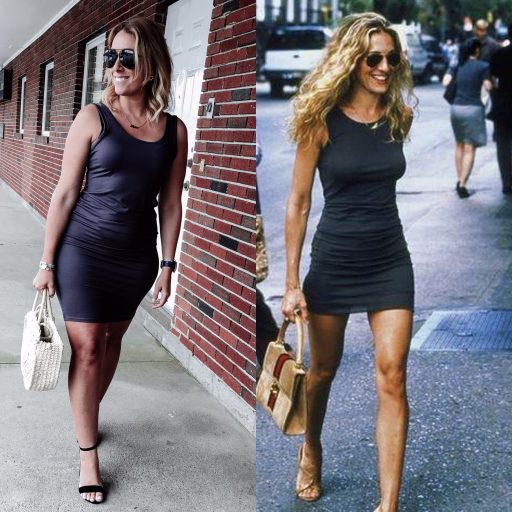 LOOK 3:  The Classic Carrie Bodycon
Before bodycon was even a word (I think), Carrie was often seeing sporting these frame fitting dresses and slaying it. This dress was worn in the episode “Shortcomings” guest starring the then relatively unknown, Justin Theroux. Of course she’s rocking her Carrie necklace again so I did the same and paired it with black heels and some aviators. 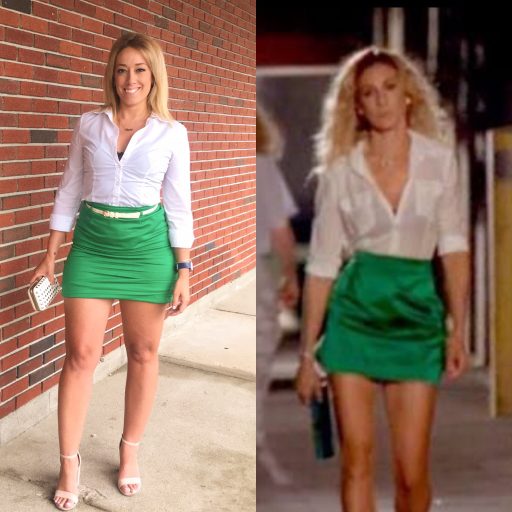 LOOK 4: The Green Mini
My friend Ashley recently shared on her Snapchat story how this look is one of her favorites that Carrie wore. Me too, girllllllll! Since I was wearing these outfits to work, I had to keep my green skirt a little longer than Carrie’s (but rolled it for the picture). This look was simple to recreate with a classic white button down, and black lace bodysuit underneath. I toyed with the idea of wearing my pink glitter heels that I wore for my wedding but ultimately decided to go with a blush heel.  And while I would have loved to add some white tulle to the back of the skirt, it wouldn’t have been very practical for work so I skipped it this time around. 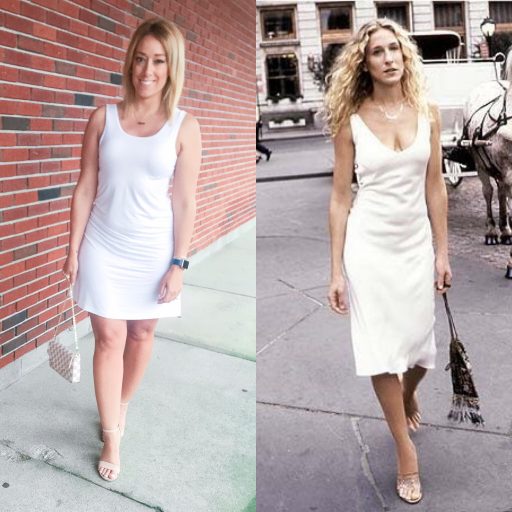 LOOK 5: Your Girl Is Lovely Hubble White Dress
Ugh, this moment always stabs me in the heart. Carrie wears this at the end of the episode where she sees Big getting into the car with Natasha after their engagement party. She realizes he’s moved on and she needs to let him go. This episode contains one of my favorite SATC quotes that I pretty much lived by in my early 20s. Diehard fans will know exactly what I mean but for those of you who don’t, here it is:

“Maybe some women aren’t meant to be tamed. Maybe they need to run free until they find someone, just as wild, to run with.”

For this look, I wore a white tank dress with my Katie necklace (because Carrie sports hers) and a modern chunk blush heel. Carrie’s dress was a little slinkier, but again, I had to keep it more office appropriate. 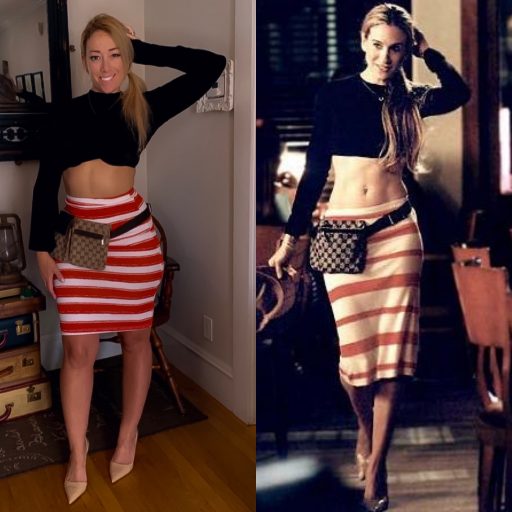 LOOK 6: Crop Top and Gucci
When Saturday rolled around, I decided to keep it going. Carrie was never afraid to push boundaries when it came to fashion. This outfit was no exception. I love when Carrie wore her hair long and straight. I pulled my hair into a side pony and added a similar striped skirt with a bell sleeve crop top and a Gucci belt bag to complete my version of this look. Carrie was killing in this outfit with her toned abs and it was a good thing too because that bartender was alllllllllll about Aiden. I always wondered where she found time to work out since she always seemed to be out with the girls, shopping, or lounging around her apartment. 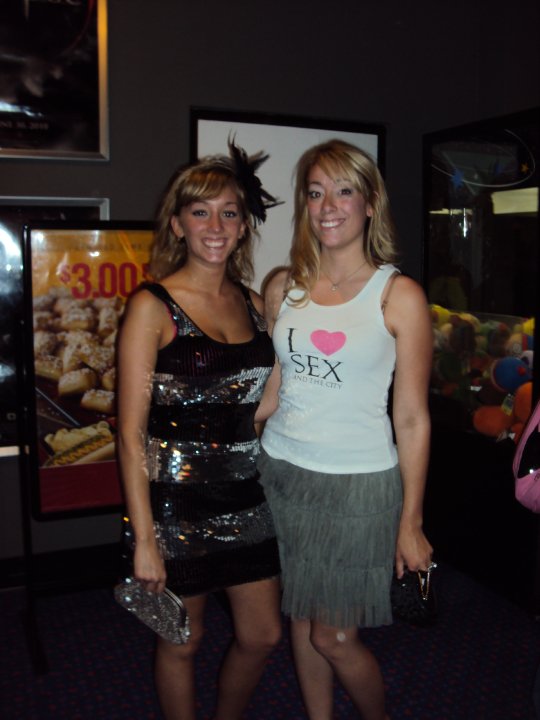 LOOK 7: The Iconic Carrie
Guys, you know I couldn’t let the week go by without a nod to the MOST iconic Carrie outfit there was! My sister bought me this tulle skirt years ago and I of course wore it to the SATC 2 premiere in 2010 (see below, yikes!).

Does anyone else keep a list of future Halloween costumes besides me and my sister? I’m planning on doing this look at some point, but of course, I’ll have to get the white version of the tutu. It may or may not already be in my Amazon cart…

I have a few more Carrie inspired outfits I’m planning on pulling out with the new season just around the corner but, in the meantime, I want to know what you think! Leave me your thoughts in the comments below and what outfits you’d like to see me do my spin on.