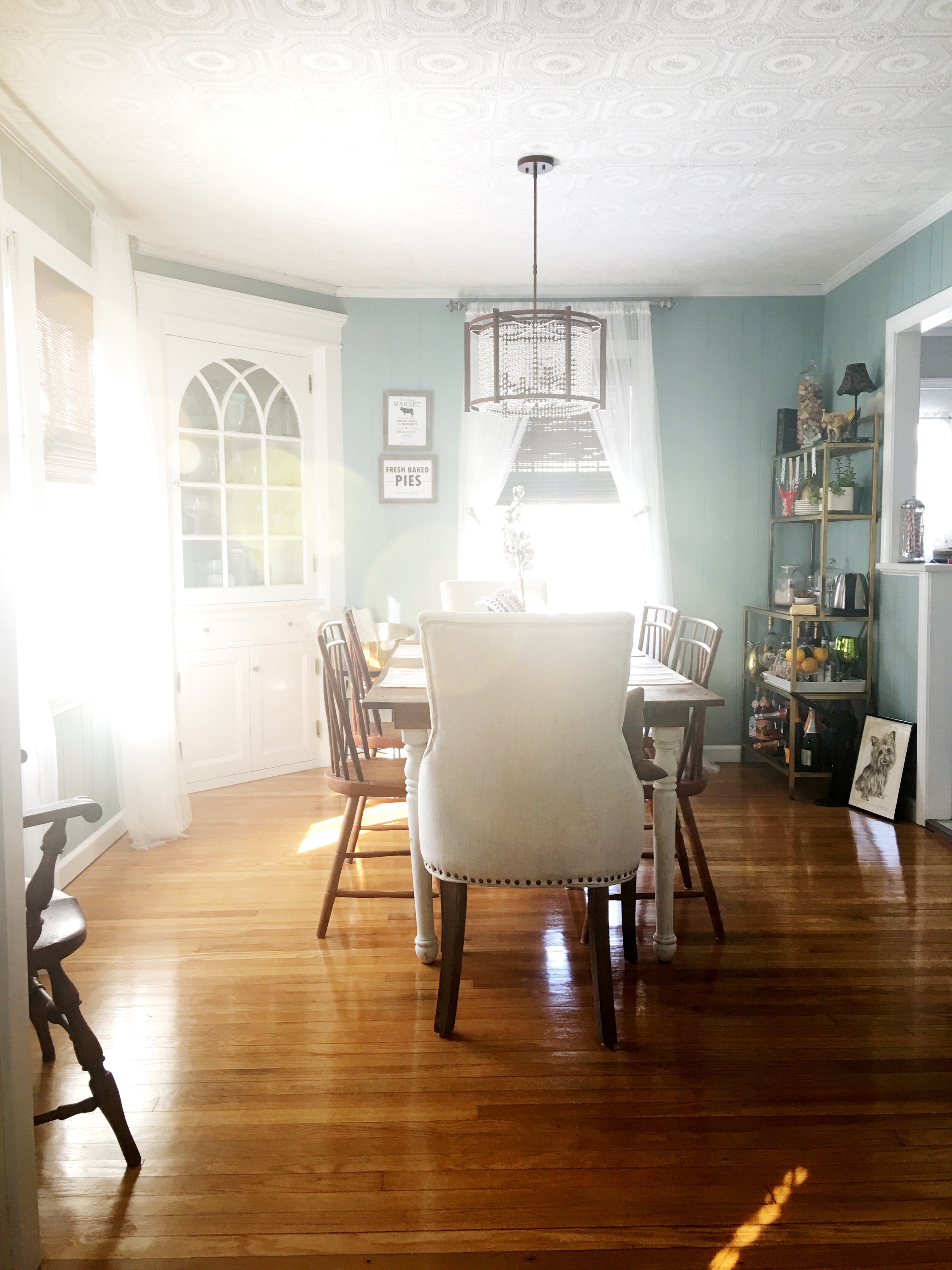 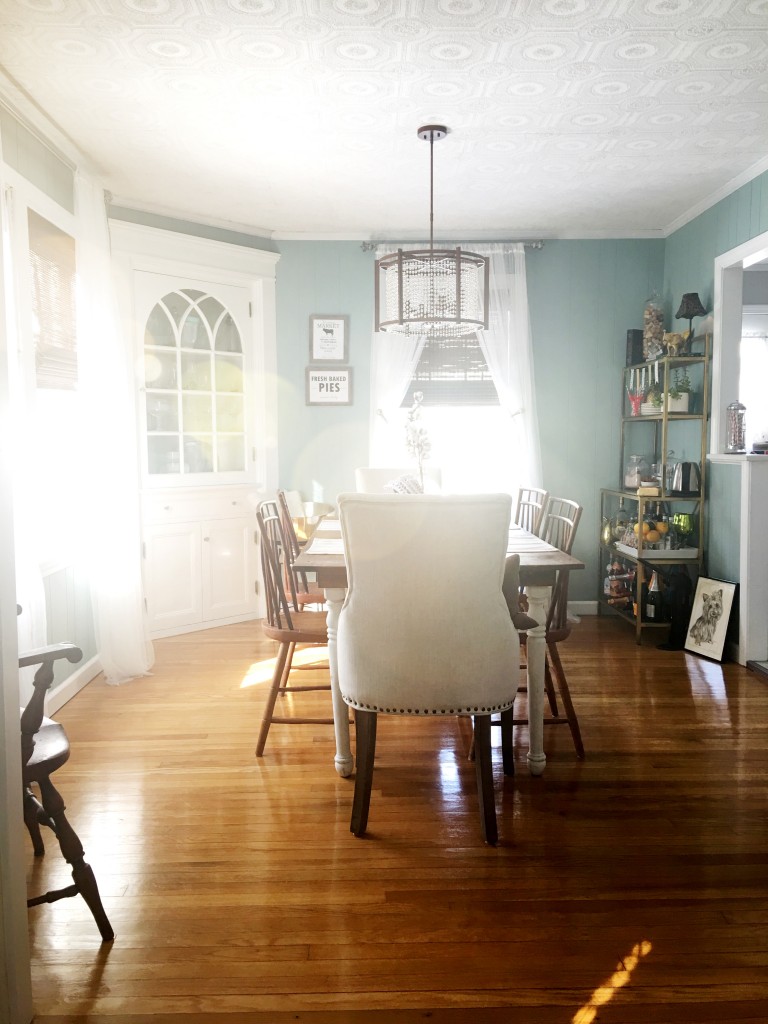 It finally happened! Well it happened months ago but I’m just getting around to blogging about it now. The dining room I’ve been dreaming about for ages is finally complete! We have been busy little bees here on Harvard between this, the guest room and some new living room furniture updates. Jamie did such an amazing job building us the perfect farmhouse style table. We picked out a few styles we liked and then he combined them into the perfect marriage. So let’s see, where to begin…

Let’s start with what finally got the wheels in motion – the antique Birdcage Windsor chairs. My parent’s neighbors were having a yard sale. I knew it would be epic because their house is like straight-out-of-a-catalogue gorgeous. Unfortunately, I couldn’t go because I was working so I made sure my parents were on the lookout for me. I got a text from my mom asking if I liked the chairs. She knew I was looking for something similar for the dining room. And for all 4 chairs for $25, it was a steal. SOLD! 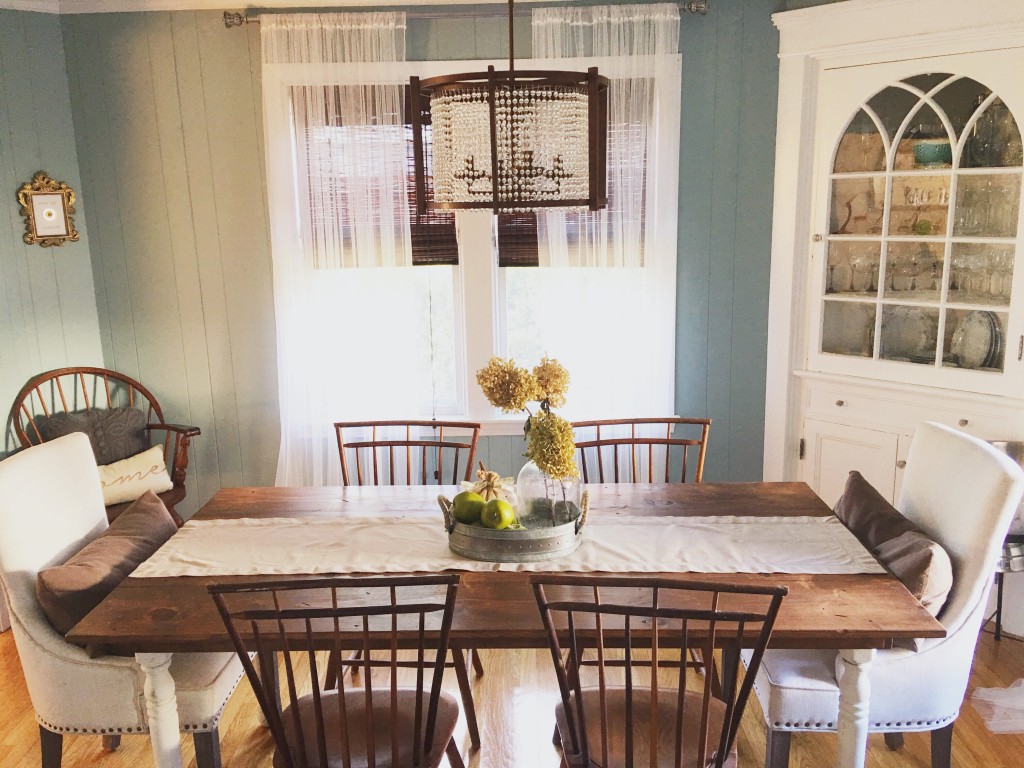 So we had 4 chairs but still needed 2 more for the ends. I wanted something with fabric and a little fancier. We started our search at HomeGoods where I found the perfect chairs. Jamie didn’t want to spend $400 on 2 chairs though. I tried to argue by stating we’d saved so much money by getting the other chairs for such a good deal. He wanted to keep looking around. A couple of weeks passed and we still hadn’t found anything so back to HomeGoods we went. I told him those chairs had better still be there. ONE chair was there. One. Marked down and everything – but just one. I was so bummed. So off we went again in search of chairs. Another week or 2 went by and we were back at HomeGoods. This time we found a different chair that we really liked. The problem again – just one. So we had them hold it while we checked a Marshalls and 2 TJ Maxx’s. No luck. Then I remembered a new HomeGoods had opened not too far from us. The next day, my mom and I set out and right as I walked into the store, I spotted them! The only 2 there were. I was so happy. HomeGoods happy, actually, haha!

So now we had all 6 chairs. I’d already sold our current dining set to a friend and I knew once it was gone, Jamie would be really motivated to build the table. We went to Lowe’s to pick out the wood. We decided on 4, 10” pine boards. Easy peasy. My mom had an old kitchen table she wasn’t using and we liked the legs on it so off those came. Next it was time for Jamie to begin assembly. He had saved a ton of square headed nails from when he ripped up the subfloor in what became the upstairs bathroom. I didn’t know he’d done it but I’m so glad he did. This is how I know we’re soulmates. He used some to hold the table together but also banged a bunch in random places to give it a vintage feel. We then distressed the table (and got out some frustration) by whipping it with chain and gouging it a little in some places. Fun! 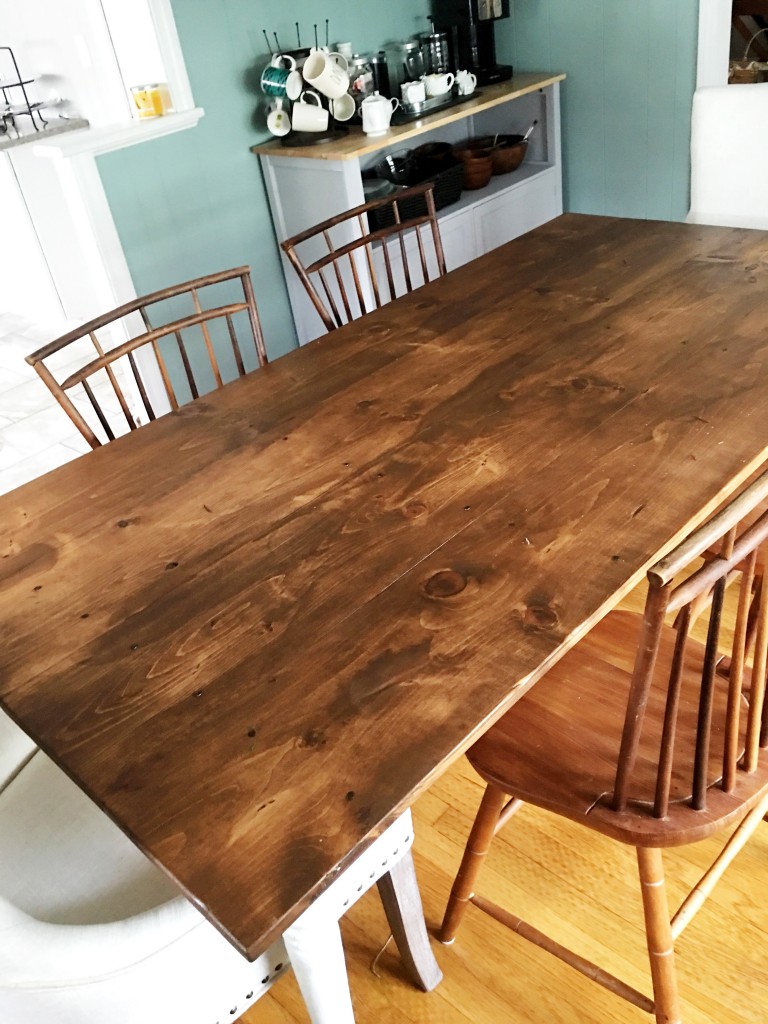 Next was the stain. I had picked this Minwax stain out from Home Depot in American Walnut. I had originally wanted more of a weathered grey but in order to somewhat match the chairs and not have a million different wood colors, I tried to get as close to them as possible.

Look at that table, isn’t she pretty?! I am so impressed with my handy husband. I think I’ll keep him around. 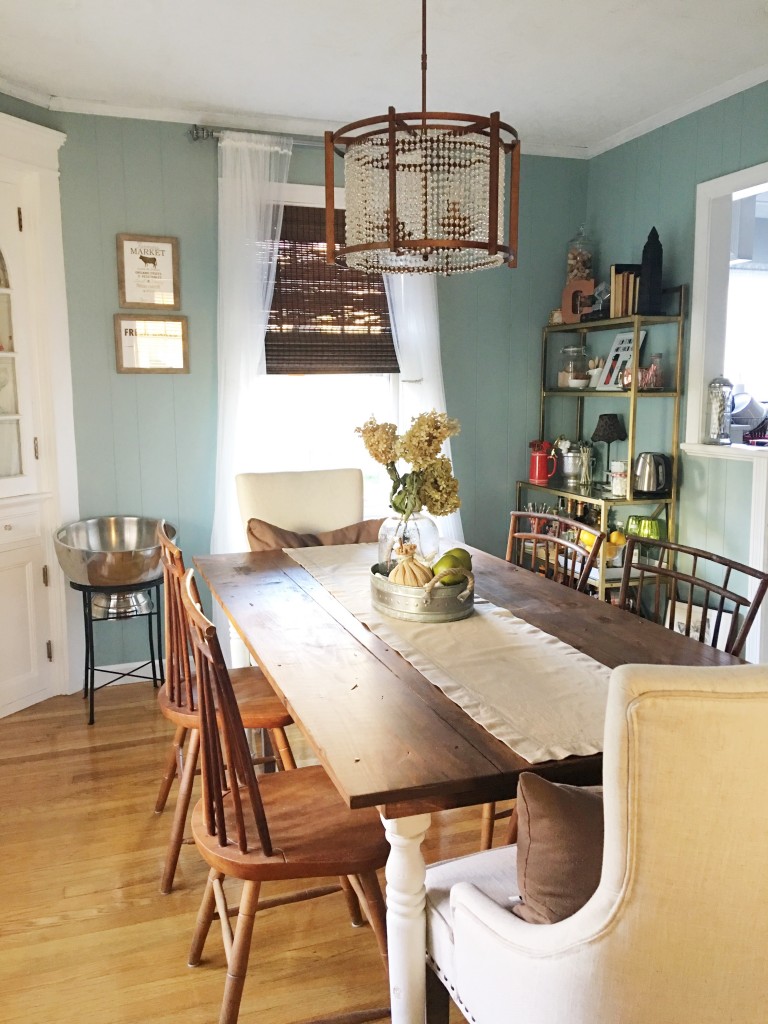 We took our old kitchen “cart” and repurposed it to a buffet. I chalk painted it a light grey (Primitive from Michaels) and we sanded down the butcher block to stain it the same color as the table. Love it! One of my favorite parts was styling the top. Now it’s freed up space in the kitchen and will give us extra space for when we have people over. Above the buffet is my vintage Westminster Abbey tea towel that I framed. 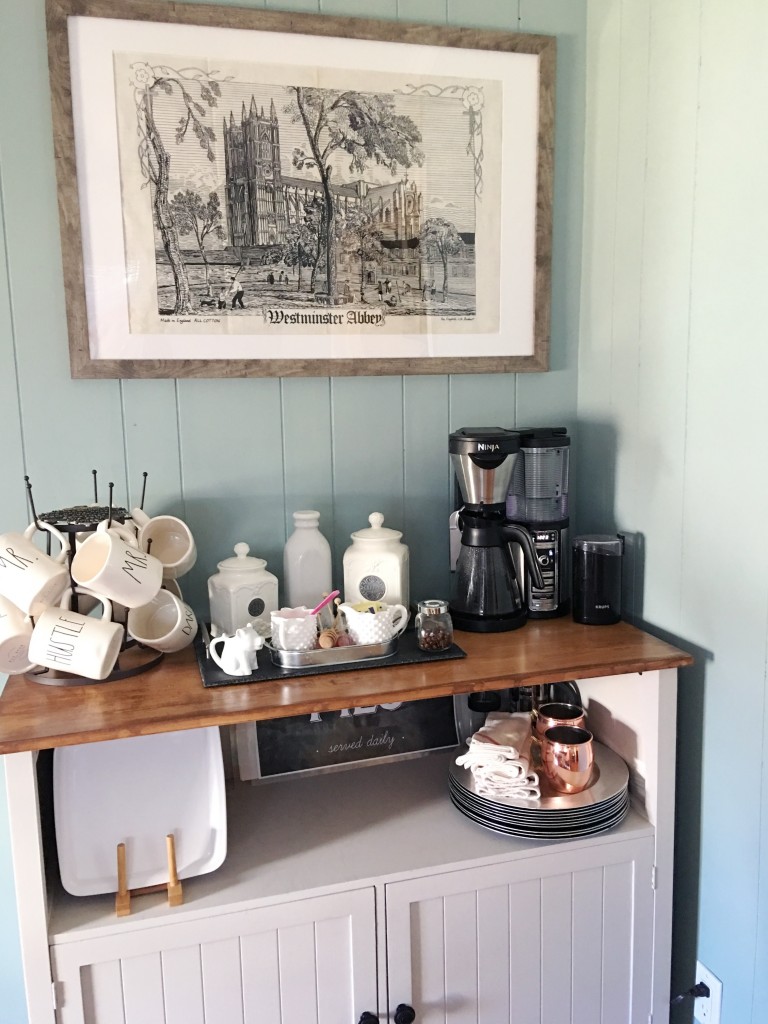 I also created a few prints (available in my Etsy shop for just $5 each!) for the walls. Aren’t they cute? 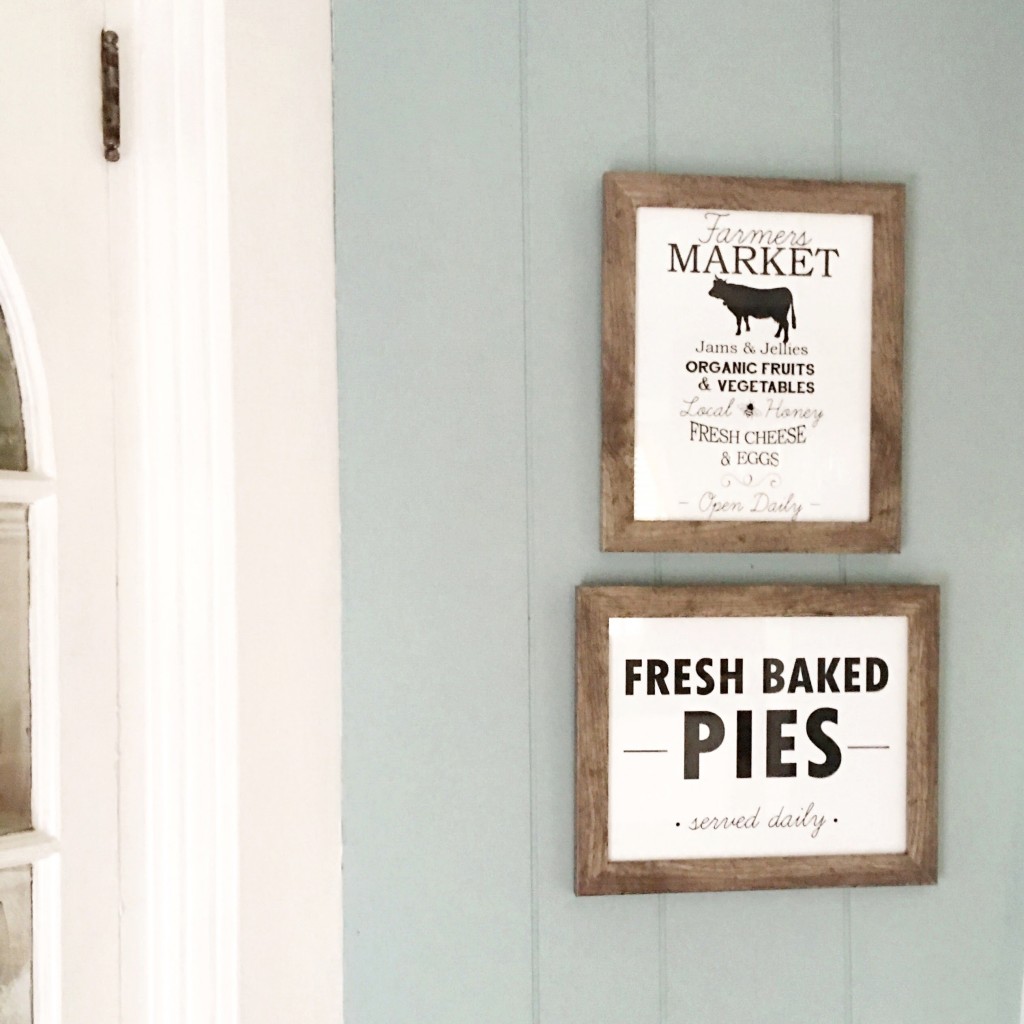 Lastly, we moved the bar for the third, and hopefully final, time. Originally we had it in the living room but after my Grampa died, I inherited my Gramma’s hope chest. We need to make room for it so things got shuffled around and the bar was move to the same corner (different wall) as the buffet is now. I needed the bigger wall for the buffet so we just slid it down to the other corner. It actually fits perfectly so we really lucked out. Things could have gotten tricky with the radiator there. 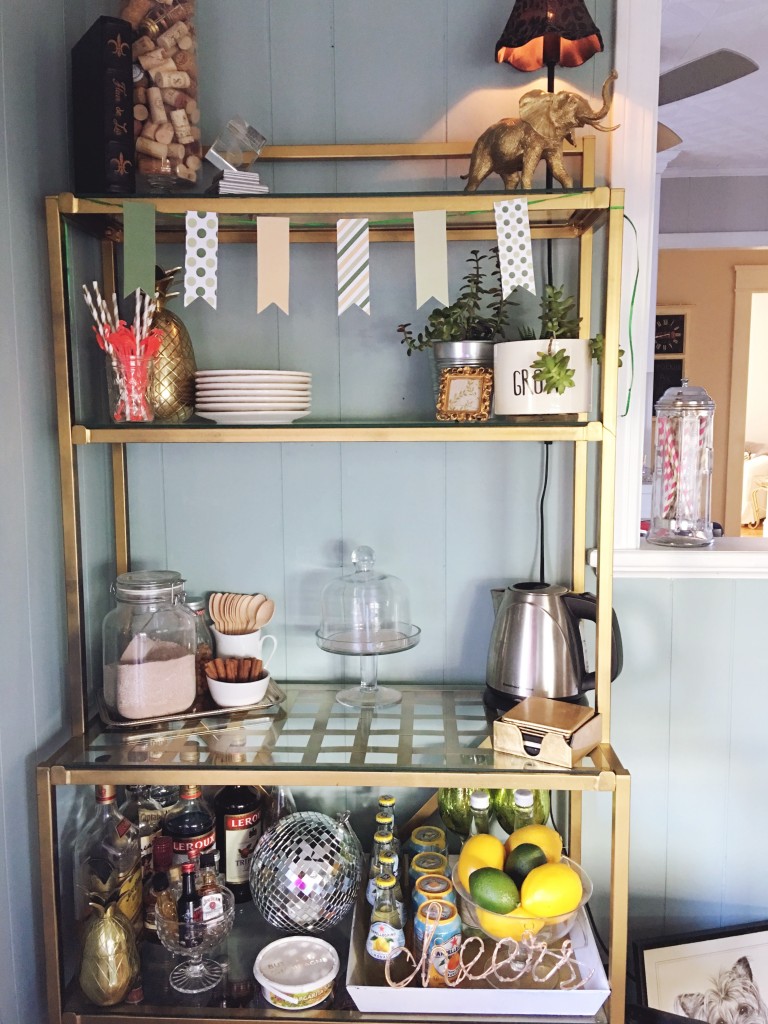 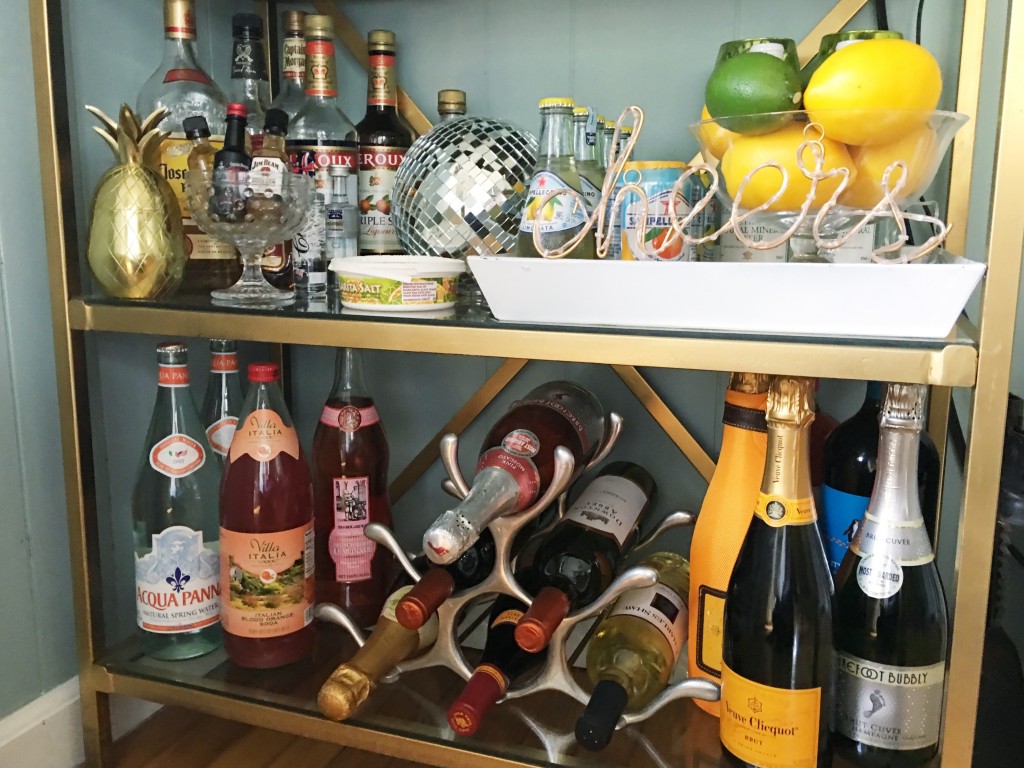 I love the mix of old and new, rustic meets modern glam. And I love mixing metallics. You’ll notice that there are hints of silver, gold and copper all over almost every room in the house. I guess I really do leave a little sparkle wherever I go!

Thanks for reading this very long post! Have a great day!